At one time the largest mangrove forest in the world was ‘Sundarban’. A pirate’s sanctuary. When fishermen go to catch fish, they Kidnapped, compensation was demanded in return. not to give If you can, that jailer is destined to die.

It continued to grow like this Anarchy, RAB forces come forward to eliminate them. The movie ‘Operation Sundarban’ is about their success story. 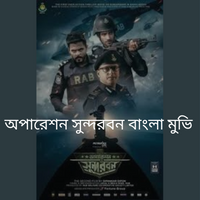 The film is produced by RAB, so their work is all over the film Tactics are shown. Hence the characters of RAB members
Multidimensional  To free Sundarbans from pirates.

The responsibility for the purpose falls on Siam, and with him all the time Another hero is Roshan. Remain with these two Members are important too.

Nusrat Faria is play the role of counting tiger.
On the other hand, another heroine Darshana is a doctor by profession.

After watching the name of the movie, teaser or trailer, understand it naturally I thought it would be action packed and Bandits of Sundarbans About jobs and their suppression.

But after watching the movie I understand about my misconception. Around the Sundarbans Stories of smuggling, bandits, kidnappings were on this forest About the life and livelihood of dependent people.

where how what Either, how the bandits are hostile day after day in this terrifying jungle Survive the situation and carry out their criminal activities.

And that How many sacrifices of the law and order forces while suppressing have to do Roughly speaking, this was the ‘operation’ Sundarban movie.

There was so much multicasting in cinema that at one time I was in doubt; Everyone will get their proper space. that Very well handled by the producer.

Each character There was a contribution to the cinema, albeit a small one in terms of time It was quite compact in seams.

Raisul Islam Asad, Everyone tried to do well including Siam, Taskin, Roshan From each place.

But Saju did the best. Manoj playing the role is authentic. A simple one The youth of the village went astray to make a living and came back again.

He excelled every moment of his arrival. As Opar did Bengali actress Tua Chakraborty.

The character ‘Papadi’ is as it really is He did as he should. As long as he was on the screen, the audience I enjoyed it very much.

Cinematography will get the best compliment in the movie. The beauty of Sundarbans is beautifully presented.

When I see the beginning of the movie, the length of this movie is 141 minutes Looks like I was thinking about it for so long! think of it.

There were many reasons behind it but those reasons are repeated .

This movie will get a lot of praise for not doing it. However It was the essence of the beginning and end of the movie. As a movie very fast There was no chance of being bored.

Operation movie is released on cinema hall on 23 September.  Download operation Sundarbans is currently not available.